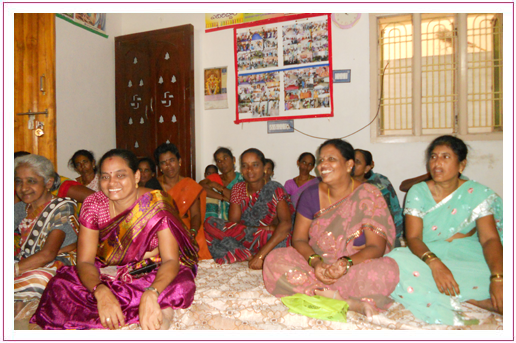 Single Women Empowerment
Mahila Margadarshi implementing “Single Women Empowerment Project” with the support of Centre for World Solidarity since 2008. The women who unmarried, widow, destitute, victim of trafficking, disabled, deserted, orphans, living single, survivors of VAW, young women 18-45, a high risk of acquiring STI and HIV infected are treated as single women and considered as beneficiaries of the project, we are working with 1839 direct and 3326 indirect single women beneficiaries in 20 villages, the beneficiaries formed as village sanghas, discussed themselves about their issues related to rights and accessing government programmes.  Four Mandal samakhyas and a District Samakhya formed and strengthened to working on single women and their families.  We regularly update their knowledge on various issues, rights and accessing Government Schemes, established linkages with Panchayats, providing assistance for income generation through the project and also from the agencies like NABARD

Women’s Leadership:
Mahila Margadarshi working on women’s leadership and Good Governance with the support of The Hunger Project through “Empowering Elected Women Representatives in Panchayat Raj”, we strengthen the knowledge of 844 Elected Women Representatives on their roles, rights and responsibilities, made a vision building for the development of their panchayats, improving their knowledge on importance of Gram Sabha and providing handholding support to achieve the goal

Good Governance:
Mahila Margadarshi working with people’s representatives on good governance, we campaigning on Pre-Election voter awareness for electing right person as representative and strengthening the capacities of elected representatives in urban and rural areas, sensitize the roles and responsibilities of panchayats and also elected members for providing better services